The start of a new year encourages us to look back at what happened and think about what is coming. Having come across this post by Fred Wilson of USV I thought a similar analysis of the development of Point Nine’s portfolio could be an interesting exercise to provide some long term perspective and maybe deliver some interesting insights.

A big part of our investment thesis at Point Nine is to invest in SaaS and marketplaces startups. The chart below illustrates this showing the development of our portfolio, now across three funds, since 2010. It shows, for every year, the number of active companies in our portfolio, split in three categories: SaaS, marketplaces and other. Admittedly, in some cases it was hard to clearly categorise the companies. I tried nevertheless and the result is that currently we have investments in just over 60 companies in our three funds, roughly half of them are SaaS companies, ca. ⅓ are marketplaces and some 15% are outside of the two main categories. 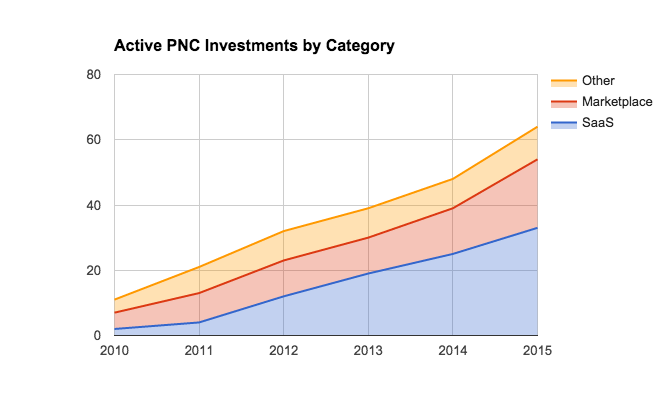 What is harder to read on the above chart is how the dynamics looks like on a year-by-year basis. The next chart (below) does a better job at showing this. What it shows is, among other things, that in the last years we have been consistently making 10 or a few more investments per year and that 2015 was our most active year ever, with 17 new investments (I also included 2 that have not entirely closed yet, so that they will be moved to 2016, if we repeat the analysis in the future). 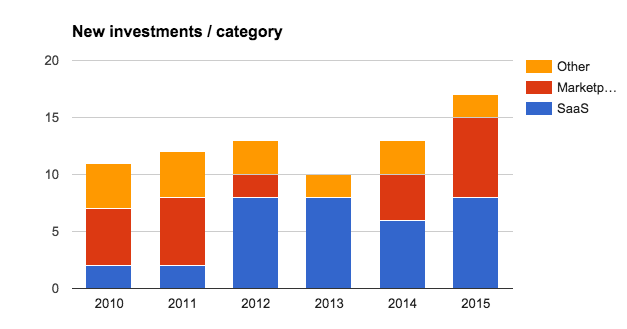 Interesting is also what these charts do not show. Firstly, the category ‘other’ is not really revealing, so I will explain it in a bit more detail. Mainly, it accounts for categories such as Adtech, E-commerce and Mobile Consumer. We do have interest in these categories, and have made investments in them in the past, but they have not been at the core of our activities. There are excellent companies and entrepreneurs operating in these areas, yet we simply chose to put our systematic efforts into SaaS and marketplaces and treat the other business verticals more opportunistically.

Furthermore, what the charts do not show at all is the split of our investments across industries. We are explicitly very focused on SaaS and marketplaces as very powerful Internet-based business models and we generally do not prioritize specific industries. We believe in the power of these two business models to transform many sectors of the global economy and look for opportunities across them.

I believe that our focus on SaaS and marketplaces going forward will remain similar to what it has been in the past and I do not expect major changes to this trend. However, recently our efforts have been focused in some areas more than in others. Developer tools, education, financial technology (incl. bitcoin) and health definitely are among the key industries and themes for us right now. It probably is already visible in the numbers - but this is something for another blog post. Yet, although not yet explicit, I expect our industry focus to strengthen in 2016 and it will be interesting to see whether we really go that route and which sectors will turn out most interesting to us.

Many thanks to Savina for helping me prepare the figures for the charts and to the Point Nine team for feedback.